Hessel, a resident of Mainville, was cited for management and innovation in several areas of the Environmental Health program at HCPH.  In his nomination, he was recognized for his work to bring standardization to inspection processes, such as in food facilities, swimming pools and lodging.  He was instrumental in creating the HCPH Clean Kitchen Award recognizing foodservice operators for safe and sanitary practices.  In addition, he has championed the agency “mantra’ of education over enforcement, working closely with licensees to understand and correct inspection findings before they become issues.

Under Hessel’s leadership, the Environmental Health Division received the 2013 Samuel J. Crumbine award, recognizing the HCPH food program as the top performer in North America.  Finally, the nomination mentioned that Hessel personally responds to many of the more than 2,000 complaints received annually in his programs, taking a special interest in helping citizens resolve issues.

“Jeremy exemplifies the standards we set for working with our citizens and businesses,” says Hamilton County Health Commissioner Greg Kesterman.  “During the pandemic, Jeremy and his team overcame challenges and worked to maintain sanitation inspections.  This was particularly important during COVID, as many people accessed food service operations in many new ways.”

Hamilton County Public Health works to assure the 480,000 citizens living outside the cities of Cincinnati, Norwood and Springdale are safe from disease, injury and contamination. 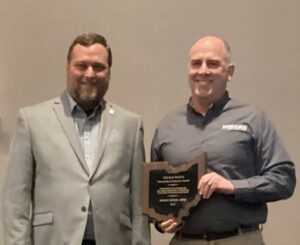