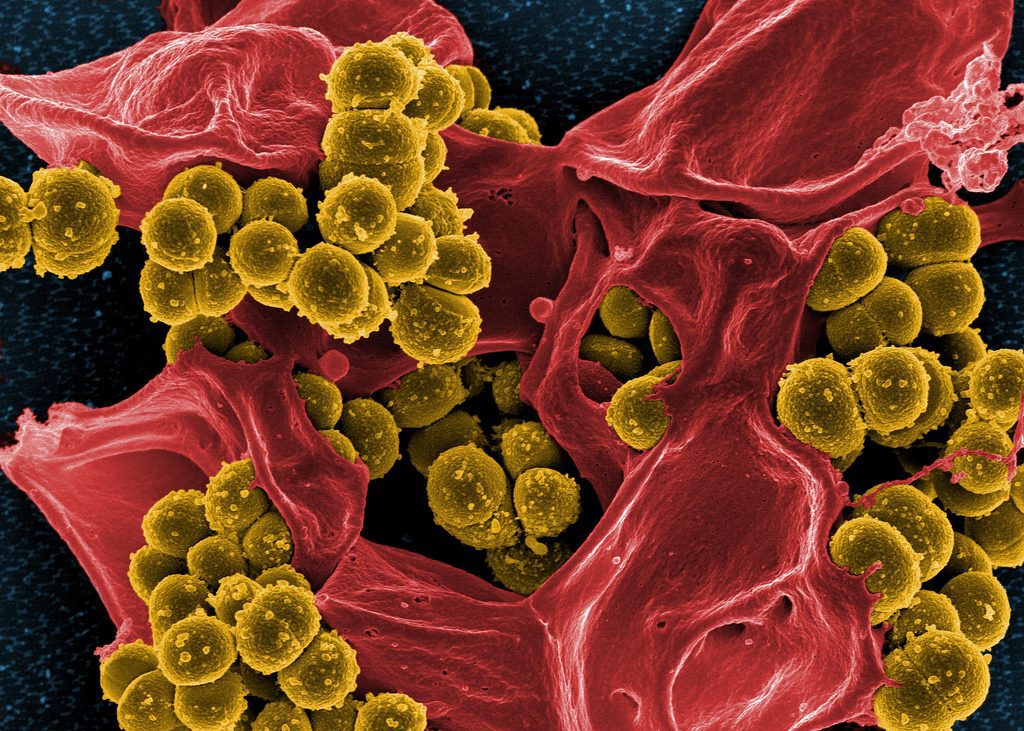 What is Staphylococcus aureus (staph)?

Staphylococcus aureus, often referred to simply as “staph,” are bacteria commonly carried on the skin or in the nose of healthy people. Approximately 25% to 30% of the population is colonized (when bacteria are present, but not causing an infection) in the nose with staph bacteria. Sometimes, staph can cause an infection. Staph  bacteria are one of the most common causes of skin infections in the United States. Most of these skin infections  are minor (such as pimples and boils) and can be treated without antibiotics (also known as antimicrobials or antibacterials). However, staph bacteria also can cause serious infections (such as surgical wound infections, bloodstream infections, and pneumonia).

What is MRSA (methicillin-resistant Staphylococcus aureus)?

Who gets staph or MRSA infections?

Staph infections, including MRSA, occur most frequently among persons in hospitals and healthcare facilities (such as nursing homes and dialysis centers) who have weakened immune systems. These healthcare-associated staph infections include surgical wound infections, urinary tract infections, bloodstream infections, and pneumonia.

What is community-associated MRSA (CAMRSA)?

Staph and MRSA can also cause illness in persons outside of hospitals and healthcare facilities. MRSA infections that are acquired by persons who have not been recently (within the past year) hospitalized or had a medical procedure (such as dialysis, surgery, catheters) are known as CA-MRSA infections. Staph or MRSA infections in the community are usually manifested as skin infections, such as pimples and boils, and occur in otherwise healthy people.

How common are staph and MRSA infections?

Staph bacteria are one of the most common causes of skin infection in the United States and are a common
cause of pneumonia, surgical wound infections, and bloodstream infections. The majority of MRSA infections occur among patients in hospitals or other healthcare settings; however, it is becoming more common in the community setting. Data from a prospective study in 2003, suggests that 12% of clinical MRSA infections are community-associated, but this varies by geographic region and population.

What does a staph or MRSA infections look like?

Staph bacteria, including MRSA, can cause skin infections that may look like a pimple or boil and can be
red, swollen, painful, or have pus or other drainage. More serious infections may cause pneumonia, bloodstream
infections, or surgical wound infections.

Are certain people at increased risk for community-associated staph or MRSA infections?

CDC has investigated clusters of CA-MRSA skin infections among athletes, military recruits, children,
Pacific Islanders, Alaskan Natives, Native Americans, men who have sex with men, and prisoners. Factors that have been associated with the spread of MRSA skin infections include: close skin-to-skin contact, openings in the skin such as cuts or abrasions, contaminated items and surfaces, crowded living conditions, and poor hygiene.

How can I prevent staph or MRSA skin infections?

Are people who are positive for the human immune deficiency virus (HIV) at increased risk for MRSA? Should they be taking special precautions?

People with weakened immune systems, which include some patients with HIV infection, may be at risk for
more severe illness if they get infected with MRSA. People with HIV should follow the same prevention measures as those without HIV to prevent staph infections, including practice good hygiene, cover wounds (e.g., cuts or abrasions) with clean dry bandages, avoid sharing personal items such as towels and razors, and contact their doctor if they think they have an infection.

Can I get a staph or MRSA infection at my health club?

In the outbreaks of MRSA, the environment has not played a significant role in the transmission of MRSA. MRSA is transmitted most frequently by direct skin-toskin contact.

What should I do if I think I have a staph or MRSA infection?

Are staph and MRSA infections treatable?

Yes. Most staph and MRSA infections are treatable with antibiotics. If you are given an antibiotic, take all of the doses, even if the infection is getting better, unless your doctor tells you to stop taking it. Do not share antibiotics with other people or save unfinished antibiotics to use at another time. However, many staph skin infections may be treated by draining the abscess or boil and may not require antibiotics. Drainage of skin boils or abscesses should only be done by a healthcare provider. If after visiting your healthcare provider the infection is not getting better after a few days, contact them again. If other people you know or live with get the same
infection tell them to go to their healthcare provider.

For further questions, please contact our Disease Prevention Division at (513) 946-7800.