Health District sanitarians operate a comprehensive mosquito surveillance program to monitor the presence of West Nile virus (WNV) and other mosquito-borne illnesses in Hamilton County. Hamilton County Public Health works with specialists at the Ohio Department of Health on surveillance activities, including mosquito trapping and testing.

WNV is a viral disease that can be carried by birds and is spread when a mosquito bites an infected bird. If a carrier mosquito bites a human or animal, they could become infected. The virus is not spread from person-to-person or animal-to-animal. Most people infected with WNV will show no symptoms at all and will never know that they are sick.

WNV was first isolated in the West Nile District of Uganda in 1937. It has been commonly found in Africa, Eastern Europe, Asia and the Middle East. The first case of WNV was not discovered in the Western Hemisphere until 1999, when the virus was reported in New York City. Since then, WNV has spread across the U.S.

Click here to learn more about Mosquito-borne Illness and disease.

WNV is a viral disease affecting the central nervous system that can be transmitted to humans by mosquitoes. It is important to note that most people who are bitten by an infected mosquito will never become sick. However, we should all be aware of the symptoms of WNV. Symptoms may develop 3 to 14 days after someone is bitten by an infected mosquito.

The more time you’re outdoors, the greater your risk of being bitten by an infected mosquito. Additionally, people over the age of 50 are more likely to develop serious symptoms of WNV if they do get sick and should take special care to avoid mosquito bites. Anyone experiencing any of these symptoms should contact their healthcare provider for evaluation.

Applying Larvicide
Larvicides can be applied to standing water as a liquid, granules, or briquettes. The larvicide method commonly used by Health District sanitarians involves briquettes. They are small and round and are commonly referred to as mosquito “dunks.” Mosquito dunks:

Click here for more information about recommended insect repellents and safe use tips from the Centers for Disease Control and Prevention.

Most mosquito bites simply itch and leave a red bump. However, some mosquitoes can transmit disease through bites.

Why They Bite
Mosquitoes are attracted to an individual based on a complex interaction of the many chemicals you exhale, perspire or wear. Only female mosquitoes have piercing and bloodsucking organs. Hosts include humans and domestic animals and vary with the species.

What to Do When Bitten

How to Avoid Mosquito Bites

Has Hamilton County had any human cases of West Nile virus?
Yes, the first positive human cases of WNV in Hamilton County, including the first death attributed to WNV in the county, occurred in 2002. The Health District collaborates with area hospitals and physicians to monitor for suspect cases of WNV. A reported case is considered probable until the test samples have been reviewed by the Centers for Disease Control and Prevention.

HCPH and ODH no longer collect birds for testing, but continue to track WNV through mosquito trapping in Hamilton County.

What is Hamilton County Public Health doing to prevent the spread of West Nile virus?
Hamilton County Public Health District addresses mosquito-borne public health concerns. We collaborate on mosquito surveillance activities and educate the public about ways to reduce the risk of vector-borne diseases, with the goal of reducing the incidence of human cases involving vector-borne diseases.

How should I protect my pets?
Household animals should be protected from exposure to mosquitoes. To decrease the risk, animals should not remain outside for long periods of time. If you think your pet may have contracted WNV, contact your veterinarian. An animal does not have to be euthanized if it contracts WNV; talk to your veterinarian about specific concerns.

Who should I call for more information?
Residents who live within the jurisdiction of the Hamilton County General Health District (link to who we serve) should contact the Environmental Health Division at (513) 946-7800. Information on WNV is also available through the Ohio Department of Health at 1-866-634-2968. 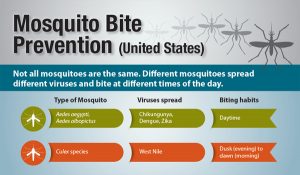