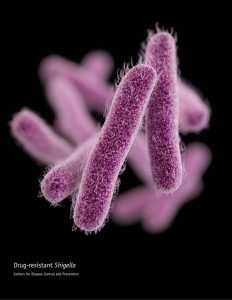 During November and December this year, Hamilton County Public Health has begun investigations into three shigellosis outbreaks among daycare age residents.  Shigellosis is a diarrheal disease caused by a group of bacteria called Shigella.  Shigella causes about 500,000 cases of diarrhea in the United States annually.  Symptoms of shigellosis include diarrhea, fever, and abdominal pain.  These symptoms typically last about 5 to 7 days and usually resolve without antibiotic treatment.  Shigella germs are present in the stools of infected persons while they have diarrhea and for up to a week or two after the diarrhea has gone away. Shigella is very contagious; exposure to even a tiny amount of contaminated fecal matter—too small to see– can cause infection.

The spread of Shigella occurs when people put something in their mouths or swallow something that has come into contact with stool of a person infected with Shigella. This can happen when:

You can help reduce the spread of shigellosis by: