Health Commissioner & Our Board of Health 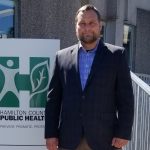 He has been with Hamilton County Public Health since 2006, progressing from environmental health sanitarian to division director, to assistant health commissioner for Environmental Health Services. During his tenure, Mr. Kesterman has managed divisions to high-performing status, capturing local, regional and international recognition. Under his leadership, the Environmental Health Division captured the prestigious Samuel J. Crumbine award recognizing the top-performing food program in North America. He has served on State of Ohio task forces dealing with environmental health concerns.

Mr. Kesterman is a strong proponent of the public health accreditation process. He has led public health quality improvement initiatives throughout the agency and has played an integral role in both achieving and maintaining the agency’s status as a nationally accredited health department.

Prior to joining Hamilton County Public Health, Mr. Kesterman integrated his passion for the outdoors and environmental protection into a series of increasingly responsible positions in environmental education. His has lived in Maine, Wyoming and California as an instructor for Regional, State and National Park services. His particular fondness for working with children led him to develop and implement conservation, fire prevention and environmental education programs for youth participating in park programs.

Public commentary is welcome at the beginning of the meetings only. Speaking time is limited to two minutes per participant.

Members of the Board of Health

Board of Health Meeting Minutes

Board of Health Regulations & Resolutions

Our Board has the authority to adopt rules, regulations and resolutions, which have the same status as law, and to enact policies within Hamilton County Public Health.

View our current Schedule of Records Retention and Disposition.

Regulations and resolutions passed since 2007 are available to view.  If you require access to a regulation or resolution from a year prior to 2007, please contact us.

Prior to 1919, each municipality or township in Ohio operated as its own health district, employing part-time, little-educated public health employees on salaries averaging $4-10 a week. More than 2,100 health districts existed in Ohio in the first two decades of the 1900s, with little oversight from the State Board of Health.

The Hughes Law and subsequent Griswold Act, which received widespread support from labor unions, women’s organizations and medical professionals, created a public health model for the country by organizing local health districts into city and county areas of populations of 25,000 or more.

At a minimum, each district was required to employ a full-time health commissioner, a nurse and a clerk. In addition, each district was required to have a five member board of health, with the health commissioner serving as administrative or executive agent of that board. A newly reorganized State Department of Health was given more oversight over local health districts, though local health officials retained the authority to resolve local issues.

In addition to monies collected at the local level, a $2,000 state stipend was given to each local health district to assist in carrying out public health duties in their respective jurisdictions. In Hamilton County, Dr. Charles Aleshire Neal was appointed the county’s first health commissioner in 1920. Dr. Neal soon after submitted a proposal for the district’s 1921 operating budget, totaling $20,000 including salaries for 13 part-time Environmental Health Specialists, a microscopist and a clerk. In 1929, Dr. Neal left Hamilton County to become the State Director of Health.

Much of the public health work conducted in Hamilton County in the 1920s is still carried out in some form today. For example, issues including school inspections, communicable disease prevention and reporting, and sanitation issues are still concerns in the 21st century.

Today, thanks to advances in technology and communication systems, these processes are carried out more quickly and more efficiently.
Partners in our community can be notified within hours of imminent public health threats or emergencies.

Food safety inspections, including restaurants, school cafeterias and grocery stores, are now conducted digitally, making inspection reports available to residents the next day with just the click of a mouse.

Illnesses that once led to community wide outbreaks can now be identified, tracked and treated much more quickly thanks to a real time communication system shared by a network of hospitals and physicians throughout the region.

The Hamilton County General Health District is dedicated to providing important health information to the public. Your access to this website is important to us. If for any reason you cannot access information on this web site, please e-mail us or call (513) 946-7800 to determine the best way for us to get information to you.

Hamilton County Public Health (HCPH) is providing information via this website as a public service. Users of this Web site are responsible for checking the accuracy, completeness, currency and/or suitability of all information themselves. HCPH makes no representations, guarantees, or warranties as to the accuracy, completeness, currency, or suitability of the information provided via this website. HCPH specifically disclaims any and all liability for any claims or damages that may result from providing this Web site or the information it contains, including any Web sites maintained by third parties and linked to or from the HCPH Web site.

This site provides links to other government and non-government related Web sites. Once you link to another site, you are subject to the Privacy and Security policy of that site. HCPH links to external Web sites in the hope that users will find reference material on health-related subjects. Because HCPH cannot control those sites, it cannot be held responsible for content included on any sites outside the “www.hamiltoncountyhealth.org” domain. In no way should an external link be considered any form of endorsement by the HCPH.

Links to external Web sites were examined when they were posted and were found to be of appropriate value.

Your Privacy is very important to us. HCPH respects your concern about maintaining strict privacy. We do not collect any personal identifiable information on this site unless otherwise provided by you through, e-mail, and/or electronic registration. Even when you choose to give personal information it is kept in the strictest confidence and is not sold, traded or exchanged as lists. Click here to read our Privacy Practices Statement.

We encourage you to share your comments, pictures, suggestions and opinions on our social media pages and we enjoy hearing from our stakeholders. All we ask is that you comment in a respectful way both to us and in responding to others.  All comments, posts and links are reviewed, however that does not mean they are endorsed in any way by HCPH, nor does it mean that immediate action can always be taken when there is an inappropriate post, however we will do our best to remove such posts in a timely manner.

All inappropriate comments will be deleted. These include (but are not limited to) the following:

Repeated violations of our social media policy may cause the author(s) to be blocked, banned and/or reported for abuse. Posts that violate the law will be reported to the proper authorities.

We will make every effort to monitor and moderate our social media content, usually replying to inquiries within one business day. Information posted on any of our social media platforms should NOT be considered medical advice. You should ALWAYS consult with your primary physician on any medical issues you may be having. Most facts and data come from HCPH, the Ohio Department of Health (ODH) and/or the Centers for Disease Control (CDC), unless otherwise noted.

Anything submitted to us on any social media platform is public information, so please use reasonable caution when posting and know that anyone in the world can see your posts. As such, your information may be copied and reposted by other social media users without your knowledge or consent and that is beyond our control.

Links, statistics and information from other organizations are provided as a service to you, but should not be considered an endorsement by HCPH. We are not responsible for any inaccuracies that exist on those external websites or from those external sources.